For the past two terms we’ve had an evening of music in Downing College Bar, all to raise money for Human Rights. Jamesty is an open mic event that comes round once a term, so look out for when you can next join us.

The Cage – once a year

The Cage campaign has been running for over 40 years now! Once a year we set up our cage outside King’s College, and campaign for human rights, gathering petition signatures and raising money. In 2017 we gathered approximately 600-700 signatures in 48 hours!

Giulio Regeni disappeared on 25 January in Cairo. He was researching independent trade unions for his PhD. A week later his body was found, bearing signs of severe torture. Human Rights groups say that these signs suggest the involvement of Egyptian Security Forces. The rally called for Truth for Giulio, and expressed solidarity with the friends and family of Giulio. 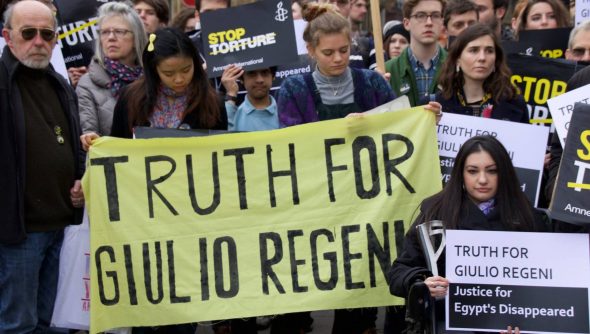 In November 2016 we ran and online campaign for one month. Every day we posted a fact about the refugee crisis, and the month culminated in a candlelit vigil outside King’s College.