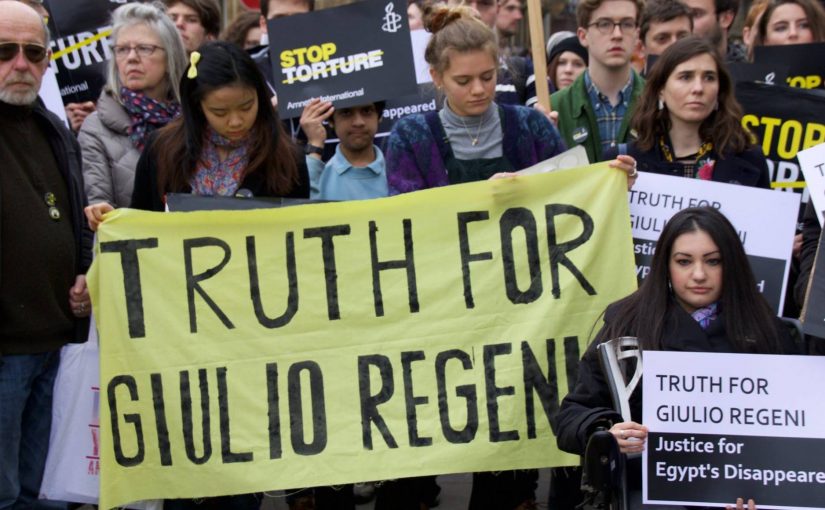 Students from the university gathered on Kings Parade to echo the calls of thousands of protesters worldwide, on Friday 22nd April, in support of the Truth For Giulio campaign.

The campaign aims to bring to light the true events surrounding the tragic death of Cambridge PhD student Giulio Regeni, whose body was found on the 3rd of February following his disappearance in Cairo on the 25th of January. Giulio’s murder was “This is a fight for academic freedom”, said Priscilla Mensah at the rally. The CUSU president emphasised the Student Union’s commitment to the campaign, offering their condolences to those who knew Giulio, noting too just how acutely the loss has been felt among the Cambridge community.

Cambridge students were not the only group represented at the rally. As well as CUAI, the Cambridge Amnesty City Group lent their support to the event, and as a result the march attracted people from all over Cambridge and even beyond. Within the university, Dr. Anne Alexander from the POLIS department – who had helped draft the letter, which was signed by over 4600 academics nationally, forcing the campaign even further into the spotlight– assisted in promoting an academic interest in the event. Dr. Glen Rangwala, an academic in the department where Giulio worked and one of his supervisors, delivered a more personal account of what Giulio was like, and urged those in attendance to continue to pursue the cause in his name. He dispelled any myth that what happened to Giulio might have been as a result of a lapse in caution: Giulio was well aware of the risks, exercised caution in every way expected of him, and yet was still a victim of this horrific crime.

Their voices were joined by those of CUAI’s chair, Eleanor Hegarty, and the chair of the Cambridge Amnesty International City Group, Liesbeth Ten Ham. Specific reference was given to the Verita Per Giulio campaign, which has gained huge momentum in Italy as in numerous other countries, and which was established and backed by Amnesty International. Eleanor outlined CUAI’s plans to assist the campaign further in the future, in particular by launching a national social media campaign, and continuing to promote the petition to pressure the British government into taking appropriate action.

The huge variety of groups present at the rally was a testimony to the shock and outrage caused by Giulio’s death. Aside from members of the university and Amnesty groups, movements such as Egypt for Solidarity, as well as various trades councils, had members present to show their support for the cause.

At the CUSU council meeting on Monday, a close friend of Giulio’s, Sophie Roborgh, emphasised how our work is far from over. Reminding students of the shocking locality of the incident – Giulio was a student here, just like us – she asked once more for the support of the student community: ‘as his university, we are his first call of defence’. Despite the rally being evidence of how the tragedy of Giulio’s death reverberated through Cambridge, and of the ability for the community to mobilise in support of an issue as important as this, there still remains no justice. The Italian government have made bold diplomatic statements in a mounting campaign for truth, but our own government appears scarily disingenuous. It is blatantly clear now that the public have spoken, with the petition reaching 10,000 signatures – the required amount to demand a response from the government – enough evidence in itself.

CUAI will continue to pressure the British government to address the case directly, and with urgency. We are following the campaign closely, and are encouraged by the announcement over the past few days that Italian delegates are to visit Cairo before the end of the week, following the eventual decision of the Egyptian authorities to hand over some, though not all, of the phone records demanded by the Italian investigative authorities some weeks ago. Further news that the British Foreign Affairs select committee have directly referenced Giulio in their report – which suggests shortcomings on the part of the British government to address human rights issues worldwide – is another affirmation that the campaign can, and must, continue.

Members of Egypt for Solidarity gave their support alongside Members of Trades Unions.

Speakers included Daniel Zeichner, MP, CUSU President Priscilla Mensah, and Dr. Glen Rangwala of the POLIS department gave a touching personal description of what working with Giulio was like.